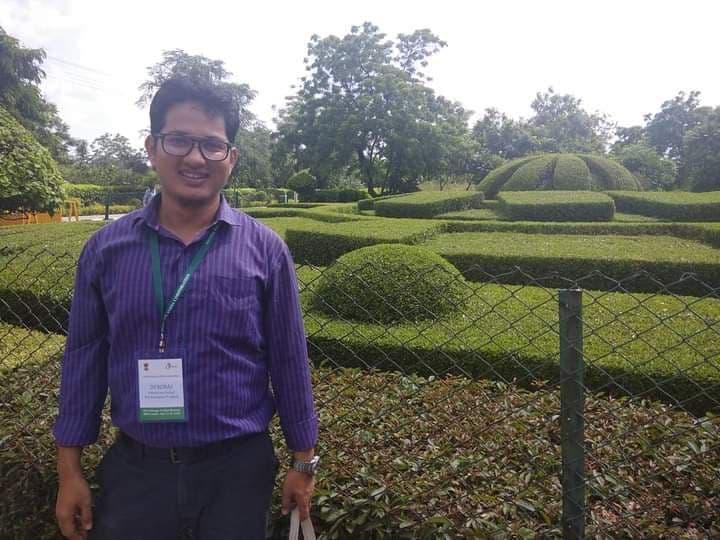 Dr. Deboraj Muchahary started his journey of life in a poor but beautiful family who reside in a small village named Koptupali. His family members are Baijanti Muchahary (mother), Dhumal Muchahary (father), Chameli Muchahary (aunt), Rashmi Muchahary (sister) and Amit Muchahary (brother). Like other village boys he was admitted to a Bodo medium school located near his house. Later he joint Bijni Bandhab H. S School and passed the 10th board exam in 2009 securing letter marks in Science and Bodo subjects. He completed higher secondary (science) from Bijni College in 2009 securing first division. Due to irregular family income often he had to drop the tuition classes. After 10+2 he had no idea which course to choose and there was nobody who could guide him. But one day his mother told him that she heard about an engineer. From that day he decided to become an engineer and remove the poverty from his family. He enrolled in B. Tech (Electronics and Communication Engineering) at Central Institute of Technology (CIT), Kokrajhar and completed the course in 2013. During his journey at CIT he had to face several problems both economically and facility wise. Due to low family income he got pocket money sufficient to pay hostel mess fee only. But his hostel life was beautiful and full of fun and joy. Even with minimal resources he managed to learn basic engineering subjects at CIT. He is thankful to all the CIT family for being supportive in the journey of life. He then joined National Institute of Technology (NIT) Arunachal Pradesh for M. Tech program in 2013. In 2016 he enrolled for PhD program at the same NIT. His PhD thesis is entitled ‘Theoretical analysis and modelling of ZnO/Si heterojunction solar cell’. He awarded with Doctorate degree in 2019 at NIT Arunachal Pradesh. Just after thesis submission he got an appointment letter from SR University, Warangal Telangana. He worked there from 27th December 2019 to 24th July 2020 as an assistant professor in the department of Electronics and Communication Engineering. Back in 2019 he applied for regular post of Assistant professor at NIT Raipur, Chhattisgarh. Recently he got appointed for the same post. His journey from Assam to Arunachal Pradesh to Telangana to Chhattisgarh is full of several incidents and wonderful moments. He has met a number of people from different cultural backgrounds and learned at least something from them.
He has a good track of research carrier was well. He has published more than 16 research papers in various International journals and conferences of repute and many papers are under review. He has a publication in IEEE transaction of nanotechnology. He is on the editorial and reviewer panel of many SCI/SCOPUS indexed international journals and conferences. He is a member of various professional bodies like IEEE, SPIE, IRED etc. He is on the advisory panel of many international conferences as well. His research interests include simulation and modelling of semiconductor devices, optoelectronic devices, solar cell and IOT.